This is a very long sandy beach with shallow waters near the small fishing port of Kokkino Pyrgos. An ideal beach for children and you will find less tourists here, for it is favored by the locals. A more secluded area is found to the east of the beach. Many tavernas with fresh fish and other Greek specialties for your dinning a la fresco. 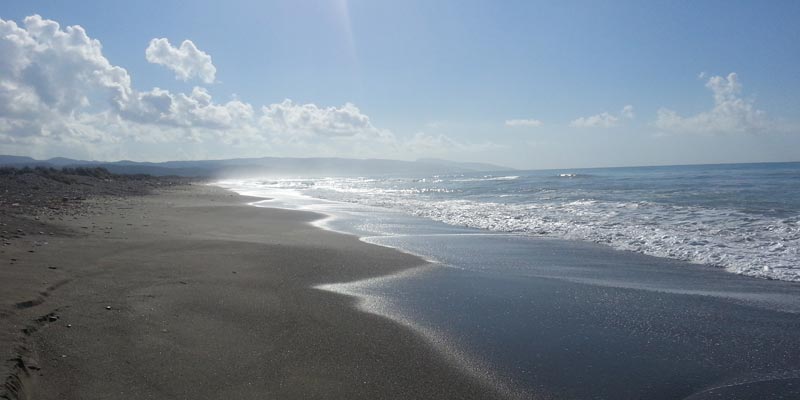 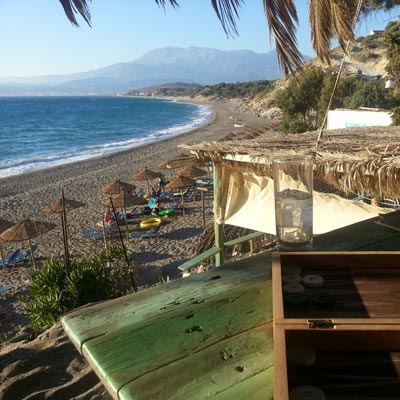 Enjoy the expanse of a sandy unspoiled beach. If you are looking for natural beauty, peace and quiet this beach is a spectacular place – a hidden treasure – golden sand and crystal clear waters await you here. The part close to Kalamaki is the naturist part of the beach with no sun beds. The beach is a nesting ground of the Caretta-Caretta Sea Turtle. The Sea Turtle Protection Society of Greece – ARCHELON surveys the beach and puts up metal cages around the nests for protection. The southern part of the beach is just below the Archaeological Site of Kommos. You will find sun beds and a taverna. The view from the beach is spectacular and breathtaking. In a distance you can see the uninhabited island Paximadia and from the other direction the legendary mountain Psiloritis disposing over the island of Crete. Kommos was a major harbour, with monumental Minoan palatial building with massive stone storage complexes, and a Minoan town (ca. 1800-1200 B.C.). Post- Minoan remains include a Greek Sanctuary that was active until the Early Roman period, when the site was abandoned (ca. A.D. 200). The portable finds, which range from stone anchors to local and imported pottery and sculpture, speak of the seagoing interests and mercantile nature of the place. Vessels from Cyprus, Egypt, and Sardinia indicate the sphere of trade contacts enjoyed by the citizens of Bronze Age Kommos. The University of Toronto has an active dig in summer months. The site is closed to the public.

A small fishing village on a long and peaceful beach. Plenty of picturesque tavernas for dining a la fresco. 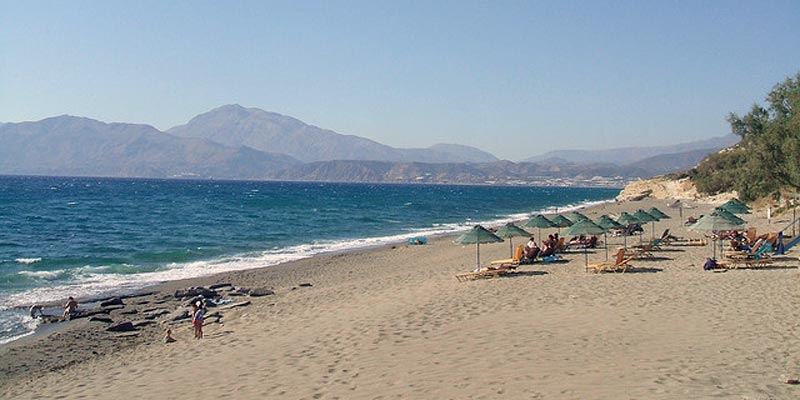 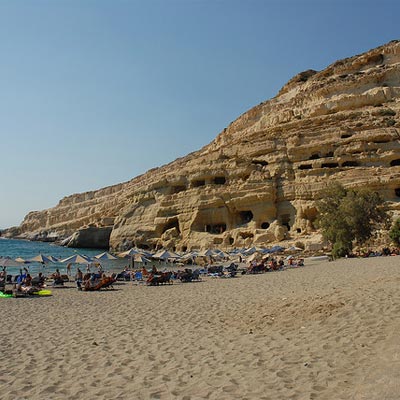 This beach is famous for being the centre for the “Flower Children” who lived in the caves along side the beach during the late 60’s and early 70’s. The most striking feature is the series of caves in the sandstone rocks – created by nature and by man along the seashore. For thousands of years these caves were left empty until some “Hippies” discovered them. The natural beauty of the environment and the mild climate during the winter months was an open invitation for the Hippies to inhabit them. Many known artist of that time followed their lead: Bob Dylan, Janis Joplin, Cat Stevens just to mention a few. This movement of the 60’s changed the small peaceful fishing village into a world known meeting place for the “Flower Children”. Matala is now a tourist resort bursting full of life and with many low cost accommodations. The caves in Matala had been used in prehistoric times for worship and residence and during the first and second century; they were used as burial chambers. Today the archaeological services preserve the caves.
The area around Matala has been inhabited since ancient times. It was the seaport of the Minoan Phaistos and Gortys during Hellenistic and Roman times. The ancient ruins can still be seen on the seabed as the port and town sunk after a major earthquake long time ago. Archaeological excavations have brought to light many sea wreckages. Southeast of Matala there is a rock which offer a panoramic view of the bay of Messera. The rock jutted out to the sea and a natural cave formed which provides natural shelter to wild birds and the Mediterranean seal. For those who want to experience the Minoan Crete, the joy of archaeological sightseeing is here. The palaces of Phaistos, Agia Triada and Gortyna are very close to Vori.

The royal mansion of Agia Triada is an important site with special natural beauty. This site was found by Italian archaeologists in 1902 – 1904. It was built in about 1600 b.c. on a hill with a spectacular view and is one the most important monuments of Minoan architecture. It is believed that is was used as a summer mansion by the king of Phaistos in the Geometrical era (8th century B.C.). During the Hellenistic era it was a place of worship – a sanctuary dedicated to Zeus was built. The most important findings from the excavations are exhibited at the Archaeological Museum in Heraklion. 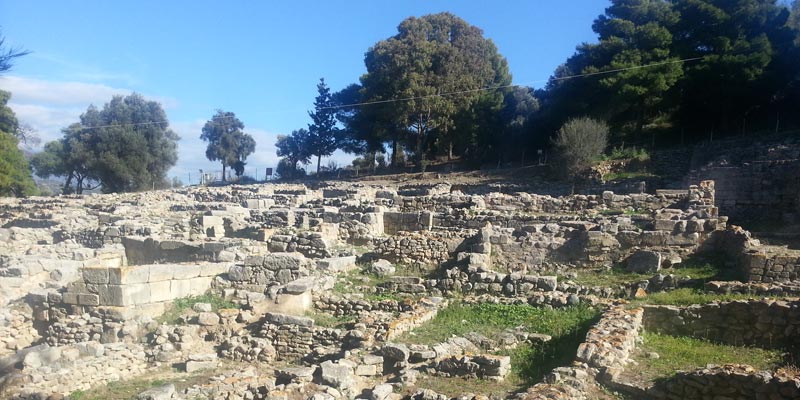 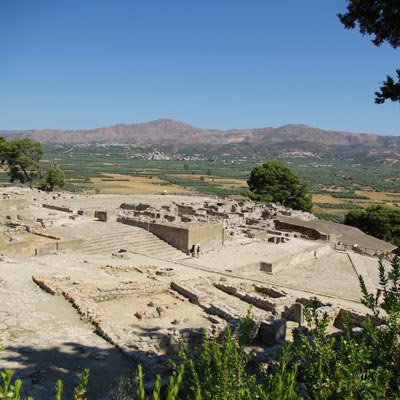 Phaistos is the second in significance Minoan town and palace after Knossos. It was built on a hill overlooking the Messera valley and the Ida, Asterousia, and Lassithi mountains. In mythology Radamanthos – son of Zeus and brother of Minos ruled over Phaistos. The first report of Phaistos is made by Homer in the Iliad as one of Cretan towns which participated in the campaign of the Achaeans against Troy with their leader Idomenaeus. Excavations, which began in 1884 by F. Walbherr and by the Italian Archaeological School with F. Walbbherr and L’Pernier, brought this Minoan treasure to light. The town was inhabited since the Neolithic period, and prospered during the Minoan period. An earthquake destroyed the first palace. On its ruins, a bigger and more impressive palace was built. Most of the restored buildings belong to this period and many parts of the earlier palace have been excavated. The town keeps its prosperity during the Mycenaean and Geometrical era, and remained a rich, powerful and densely population independent town with its own currency. Two seaports Matala and Kommos were close by. During historic times Rea’s temple was built to the south of the old palace. In the middle of the second century B.C. the town was destroyed and lost its power to Gortys. Among the archaeological findings is the most famous Phaistos disc – which script has not been deciphered, as well as many multicoloured Kerames style vases.

Gortyna has a continuing history of 6000 years. The town was named after the mythical king Rhadamanthos son Gortys. The town was inhabited since the Neolithic period. Around 160 B.C. it became the most dominant power in the area. With the Roman occupation, Gortyna became the capital of Crete and kept this position until the Saracens attackers in the 9th century invaded Crete. The Gortyn Law Code is the longest ancient Greek inscription that has been engraved in stone. 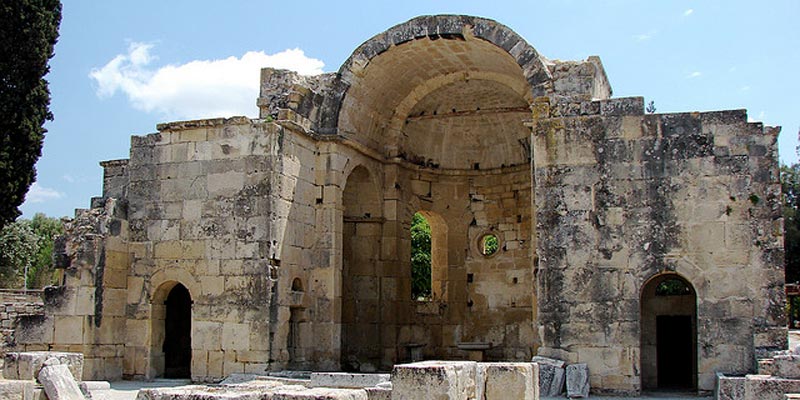